Dealing with the Liability of ‘Difficult’ Residents 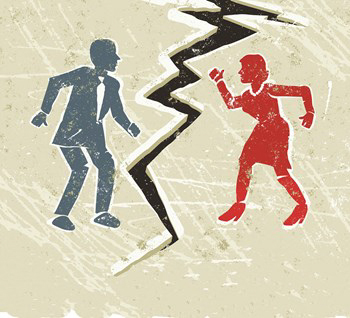 Bad neighbors are something that everyone living with shared walls fears—and not without cause; co-op or condo, small or large, chances are there’s at least one chronically objectionable person who seems to do his or her level best to annoy, thwart, and agitate his or her neighbors, and otherwise disrupt the peaceful functioning of the community.

The thing is, the term ‘objectionable’ is a subjective one. “Some members are labeled as ‘difficult’ when they really are just espousing views that may be unpopular or different from those held by the board or a majority of the other members,” says Donna DiMaggio Berger, a shareholder attorney with the law firm of Becker & Poliakoff in Fort Lauderdale. “Some of the best association leaders started out as ‘difficult’ owners.” On the other hand, behavior that can fall under that same label ranges from constant noise and unpleasant cooking odors to full-on hoarding, or even assaulting neighbors or board members in the lobby.

Obviously, punching or threatening someone is an actionable offense—as is drug dealing, or running an unlicensed business out of one’s home. Residents who are a perpetual pain-in-the-neck, who constantly bicker with their neighbors over every little thing, or whose behavior stems from unaddressed mental illness or other situations may not be illegal, but their behavior still negatively impacts the quality of life in their building community.

However, there are ways both managers and boards can handle seemingly unmanageable situations in their building or community, helping those in need of help and at the same time avoiding exposure to liability themselves.

While residents strongly support rules, they also seek exemptions for an issue that’s particularly close to their heart. Issues that commonly set off arguments between neighbors are often exterior items like clotheslines, political signs, support animals, satellite dishes and solar arrays that people feel are unsightly, or that somehow infringe on their private property.

Residents of an association have the right to participate in meetings, vote on key issues and have a responsive board but you can’t please everyone all the time. Community associations are a form of corporate representative governance and as in any democratic institution, there will nearly always be a minority on any given issue. However, even when someone strongly disagrees with the course of action or decision by the board, they still understand the process, and if they felt that their concerns were heard, don’t typically create a fuss. Sometimes however, things take a turn into problematic territory.

The line is crossed when a dissident resident stops debating the issue civilly and starts making personal and/or defamatory statements about the board or a manager. A group of residents who disagree with an outcome might form their own rogue board, set up a rival association Facebook or web page and engage in actions that can be deemed libelous or threatening. When such statements are published electronically via social media, it may become a legal issue. While not common, such personal attacks may require the board to seek a cease-and-desist letter.

Sometimes, an apoplectic owner or group of owners or shareholders may opt to turn an internal dispute into a media event, calling the press—or legislators, in some cases—to air their grievances and draw attention to themselves. The result is negative media coverage of community associations, or new laws that limit the autonomy of residents to govern their own community.

Folks who reject rules they don’t like are one thing—neighbors who are dealing with untreated mental illness or emotional disturbances present a totally different and more difficult issue for boards and managers to cope with—because they may not comprehend the rules in the first place.

Call in the Cavalry

“In one community we represented, the board became aware that pornographic films were being shot inside one of the units because someone recognized the condominium balcony,” Berger says. Needless to say, they were not pleased.

Other notoriously difficult neighbor behavior includes hoarding situations, chain-smoking and unruly animals. But tough as those issues can be to address and correct, there’s a difference between a cranky cat lady and someone who’s doing something that’s outright illegal and poses a serious threat to the safety and security of the entire community, such as drug dealing, theft or escort work.

If a truly illegal activity is suspected, Berger states that a board member, manager, or even a neighbor should contact the authorities immediately; doing anything else is well beyond the job description (and pay grade) of anyone but the police, and as such it’s the police who should investigate and sort out the situation. If visitor logs, security camera footage, or other information can be furnished to law enforcement personnel, it may aid in their efforts.

In most situations, all but the most troubled residents can be handled internally by a responsive board and a competent manager. Property managers are typically the first responders to a situation involving a difficult resident. This highlights the truly unique role that the community association manager plays and highlights the challenges of their job. After all, managers assist with producing budget and financial statements, understand how to run a meeting, have a working knowledge of governing documents and applicable state statutes—and often serve as counselors or mediators in highly-charged disputes.

The pros—attorneys though they are—agree that it’s always best not to let an issue escalate to the point of litigation, which is why making sure that your board/management team knows how to handle resolutions effectively is so important.

Most say that it’s very helpful for boards to have a closed meeting to discuss candidly how to deal with difficult people or situations, and to have a basic understanding of conflict resolution methods.

While some folks seem to have these skills naturally, for others there are resources available, including conflict resolution courses hosted by local law firms, state agencies or sometimes by management companies themselves. Florida condo association residents have access to a state ombudsman program to assist with disputes. The state of Florida also offers a course of board governance, and residents may also take in-person or online residence-only classes via trade groups such as the Community Associations Institute (CAI), of which there are 8 chapters in Florida.

There are also training and educational resources available to board members and managers to help them deal more effectively and fairly with difficult residents or with illegal or questionable behavior in their building community.

If two neighbors are feuding, and the dispute involves areas in which the association has an obligation or an authority to act, the board is obliged to assist with conflict resolution as part of its fiduciary duty to the community. Enforcing architecture standards is a great example, as is maintenance and care for the unit or its façade.

But boards don’t have an obligation to get involved in disputes that are unrelated to their authority or duties to the association—spats that involve personality conflicts, for example. When they do get involved, there are effective and non-effective ways to do mediate conflict between neighbors, which is why associations should have a clear—and ideally a written process—for handling complaints. Such a process is often referred to as an internal dispute resolution process (IDR); sometimes called alternative dispute resolution or ADR. Some states even mandate that a community association adopt and distribute some form of a dispute resolution process to residents.

Having a clear and consistent process for resolving disputes between neighbors related to the association rules, or between a resident and the board helps set expectations, provides transparency of process and ensures residents have a consistent process available. Most issues are aggravated not by the resolution, but rather by the lack of clarity on how to engage in resolution. This vacuum of information allows residents to project their fears and insecurities into the void, which only adds fuel to the fire.